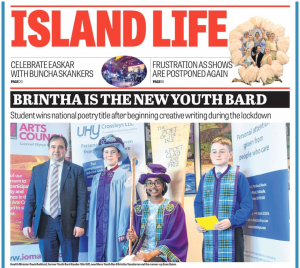 A teenager writer who turned to creative writing to help her through the lockdown has been named as the latest voice of the young Manx people.

Sixteen year old Brintha Yasodaran was handed the Bardie robes and staff after she was chosen as the third Manx youth Bard in a ceremony held on Monday.

Brintha, who is currently studying for her A-levels at Ballakermeen school, submitted two poems, ‘Ephemeros’ and ‘The Spirals End’, and impressed the panel of judges, made up from the ranks of the living Manx bards, who praised her ‘refreshing and authentic’ writing style.

Runner-up was 11 year-old Evan Quinn, a pupil from St Mary’s school, who also made a big impression on the judges with his poems ‘Ellan Vannin’ and ‘Our Catholic faith’, with the judges admitting they were amazed at ‘such awe-inspiring passion for one so young’.

Brintha said that she had never considered herself as a writer and entered the competition only after being encouraged to by her friends. After they read some of her stories written. During last year’s three-month lockdown.

‘I was quite out of my comfort zone when I entered, as I’m not someone who writes a great deal and I don’t really share what I write,’ said Brintha.

‘I’m more into my sciences than anything else.  But one of my friends thought it would be a good idea for me to enter and I though that I might as well, even though I didn’t think I had a chance of winning.’

‘I started to write during lockdown last year and I think that was a big factor in me coming up with ideas and stories. I didn’t really write before then.’

‘I think that because my GCSE’s were cancelled and I found myself with a lot of spare time.‘

‘Equally it was very much to try and maintain my mental health and keep myself active mentally.‘

‘I normally write short stories and that lead into writing poetry.  I would go through my diary entries and I would find and take inspirations from those to write my poems.  I would use anything to really get out and express what I am feeling.  ‘

I was delighted.  It was unexpected but I am very happy to be chosen.’

‘I am very much into helping children and being able to inspire others is a good position to be in,’ she added.

‘I think it is an important thing to have at least one way you can express yourself, whether it is by creating poetry or doing art or drama or whatever.’

‘Speaking in public is not something I’m used to doing, but I am prepared to give it a go and push myself.’

Bridge Carter, from the Manx Bard committee, said that this year’s competition was extremely close and that both poets were picked from a very talented pool of entrants.

‘What talent there is out there.  I never cease to be amazed at the level of confidence in some of these young people,’ said Bridge.

‘Their writing skills and performances for their ages are second to none.’

‘Young Evan wrote his winning poem at only 10 years old and, now he is 11 he is determined to be next year’s Manx Youth Bard and I don’t doubt him at all.’

‘I am really looking forward to seeing both Brintha and Evan preform at the various events planned throughout their tenure and I know the Bards are as excited as I am.’

‘The Manx Youth Bard event is a fabulous annual tradition, that celebrates the poetic flair of our young up-and-coming poets on the island, and each and every year these talented young people continue to amaze me.’

‘I just want to say a huge well done to all our entrants for their wonderful poems, and mega congratulations to those that really stood out.’

Brintha was handed her robes and staff by the outgoing Youth Bard, Xander Shirtliff and congratulated by Health Minister David Ashford.